On the Subject of Job Interviews, Soup, and Proboscidians. 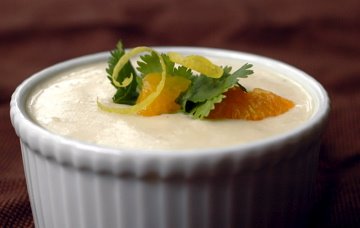 Roasted Sweet Garlic, Bread and Almond Soup
Have you ever been in a job interview where they asked you to describe yourself in one word? I have decided that the next time that I am asked that question in an interview, I will say, “eat.” If that’s not the answer they’re looking for, then I don’t belong there.

The first time I was asked that question, I asked the interviewers if I could use three words instead of one. They smiled and said no. They were so mean. Do they think that human beings should be able to reduce their characteristics to a single trait? Those two obviously did, and the one-word traits I picked for each of them were dim-witted and emaciated, respectively.

After the interviewers shot down my sensible request, I was thinking about asking them if I could combine three words into one word. For example, enthusiastic/creative/cheerful would become would become cheerativiastic, and needy/selfish/sarcastic would become sarcaneedfish, but I figured they would say NO to that too because they wanted me to be a robot like them.

Then, I considered pensively scratching my head and rubbing my chin (at the same time) for a full ninety seconds, which is a really long time in an interview, and then coming up with a marvelously random word, such as ‘proboscidian,’ which FYI is a massive herbivorous mammal having protruding tusks and a long trunk. Any way you look at it, with proboscidian, I would win. If they pretended to know what it meant and said, “Oh yes, I see, that’s very profound,” then I would win, and if they asked me for the definition, then I could either give them the real one, and then I would win (what do you think about that, robots, was that the answer you were looking for, robots?), or I could make up a false definition that required me to use the first three words that I wanted to use in the first place, and then I would also win. Take that, robots.

Regrettably, after a full second of aforementioned, mischievous contemplation, I surrendered to their merciless request, sheeplishly smiled, and said, "nice?" - articulating it more as a question than as a confident exclamation of the definitive state of my niceness.

I did not get the job. I guess they wanted a mean teacher instead of a nice teacher.

Years later, I think of all the absurd responses that would have made the moment so wonderfully and magnificently awkward:
“AWESOME!”
“Royalty. If you don’t believe me, I brought my papers as well as my tiara.”
“1/64 Native American.”
“Glittery. I have glittery starts on my underwear, do you want to see the glittery stars?”
“Can I burp my answer?”

Given the fact that I don’t have the courage to sabotage myself in an interview like that, I probably wouldn’t even have the courage to say “eat,” which, as I stated earlier, is my current strategy. But outside of a formal interview, “eat” is how I describe myself in one word, and what I plan to do to this soup, which has nothing to do with anything I have written so far, except that it is food and it is delicious and you can sip it through your proboscis. Unless you are robot, that is.

Preheat oven to 350 degrees.
Roast garlic for 30-45 minutes until it is soft to the touch.
Meanwhile, heat 4 tablepoons of oil in a large pot, add the onions, and cook over medium-low heat for 10 minutes, until soft and translucent.
Add the cream and the stock. Bring to a boil, reduce the heat and simmer for 10 minutes.
When the garlic is done, cool slightly and squeeze the wonderful garlic paste into the soup.
Stir in the garlic.
Cut or tear the crusts from the ciabatta, rip the bread into small pieces, and add to the soup. Add the sherry vinegar and simmer for 5 minutes.
In a food processor, blend the soup. Add the toasted almonds and blend those in as well.
Season to taste.
Ladle into bowls and garnish with orange segments, cilantro and mint. Drizzle with olive oil. 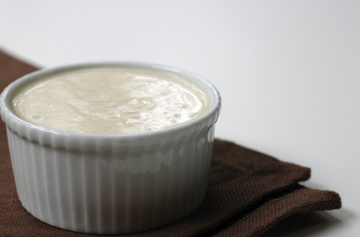 sans garnish
Posted by Erielle at 9:36 AM

And something to ponder on. I recently had a job interview and luckily wasnt asked that question.

if they had asked it I am sure I would have answered "innovative". I did tell them that I considered myself to be an innovative person anyway. And I got the job. So I reckon it's a good word to use the next time round.

and innovate does include the word 'ate', just for culinary good measure.

where do you see yourself in five years, hmnnn? grr

this soup looks so curious, the flavors are so different, i bet its yumriffic.

ha ha Sam, that's great! That will be a good one to use if I chicken out and can't go though with just 'eat.' Now that you mention it, 'creative' has 'ate' in it, too.

aria~ it is a different taste, but a yumriffic taste at that. You have to be careful not to put too much bread into the soup or it might cover up the garlic flavor, which is the best part.

Yeah, this looks good. But it's strange that you blend the bread into it. I'd be tempted to leave the bread in chunk form. And I'd use really stale bread so it would retain a little springiness. Mmm!

Wow, does that soup look wonderfully creamy and full of mellow flavors. Thanks for sharing the recipe. I blended bread into gazpacho a couple times this summer, and I loved the texture it gave the soup. Don't think I had ever whizzed bread right into soup like that before, but it was great.

Peter - "Overqualified" is the best answer. I do hope you get to use that someday.

Lisa, that's a good idea, to blend bread into gazpacho. Give it some body. Bread is good.