A Haiku About Beer in the Morning:

a lovely home brew
wait - it’s only six a.m.
cook it into jam and eat it for breakfast

Wait, what? That is not a haiku.
Do you care? I don’t. What I do care about is the massive amount of rhubarb in my freezer, the extremely diminished space in my freezer for non-rhubarb items, and this gleaming growler of wheat beer that my buddy Dan brewed, and the fact that it is only six o'clock in the morning.
Some of that brew will go straight into my mouth via a beer glass. And I will enjoy it immensely. But I will probably need to wait until at least noon. But I don’t want to. But I should. And I will. Because if I don’t, that would be weird. So instead, the tasty beverage will be combined with a few pounds of my sequestered rhubarb and simmered down into rhubarb beer jam, which no one thinks is weird… 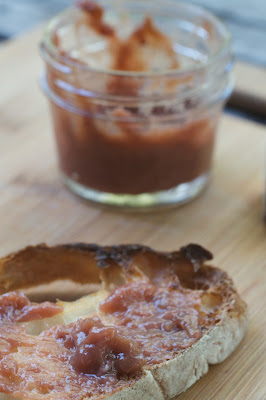 Rhubarb beer jam was the first recipe that captured my attention in Paul Virant’s new book ‘The Preservation Kitchen.’ 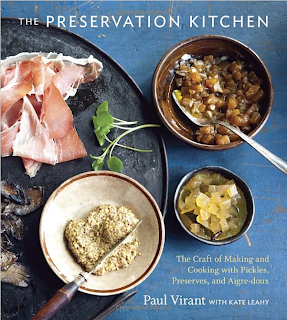 This book!
Of all the specifically organized clusters of molecules that take up space in this universe, I believe this book might be one of the most beautiful. There is a slight chance that I slept with my arms wrapped around it on the first night I brought it home. Or maybe it was a bundle of rhubarb I was cuddling with…I can’t remember. My husband was definitely spooning the growler. Anyway, this book is gorgeous.  I can’t stop licking it looking at it.

hello, canning book
i would like to lick you, k?
be cool, botulism.
Aw dang! When am I going to be smart enough to write a proper haiku? Well, lucky for you (but mostly lucky for me), I promise to spend less time honing my haiku-writing skills, and more time making tasty jams.
This jam does not disappoint. On the first taste, the fruit announces itself in a burst of flavor.  But wait - push it to the sides of your mouth a bit, and you’ll quickly notice the yeasty tang of the wheat beer. There you go. Beer in the morning.
This is not just jam for the morningtime, however!  It will boost fancy cocktails, glaze your meats, and shine on a cheese plate.
Says Michelin-star chef Paul Virant: “This jam takes advantage of the two things that the Midwest has in abundance: beer and rhubarb. Pair a locally made wheat beer with rhubarb, which grows like a weed in some parts, and we have one heck of a regional jam.”
Well, Chef Virant, you will be pleased to know that I kicked that Midwestern party-in-my-mouth up a notch. I stirred some rhubarb beer jam into some stone-ground mustard and slathered it on a Paulina Meat's veal brat that was boiled in a local Chicago ale.  Then I fed it to that husband, who was also locally made here in the Midwest. I did not write a haiku about the experience, however, because that would have significantly diminished the Midwestern authenticity of that whoopensocker of a meal.

Directions:
1. In a wide, heavy-bottomed pot set over medium-high heat, combine all the ingredients and bring to a simmer. Turn off the heat and let the mixture cool, then transfer to an airtight container and refrigerate overnight or up to 5 days.
2. Strain the mixture through a sieve and into a wide, heavy-bottomed pot (save the rhubarb for later). Bring the liquid to a boil over high heat, stirring occasionally, until the liquid reaches 215°, about 12 minutes. Return the rhubarb to the pot and simmer, stirring occasionally to prevent scorching, until the jam lightly coats the back of a spoon and its temperature has returned to 215°, 10 to 15 minutes.
3. In a large pot of simmering water, sterilize seven ½-pint jars. Once the jam is finished, use tongs to remove the jars from the pot and set upside down on a kitchen towel to drain. Turn off the heat and soak the lids and bands in the hot water. Turn the jars upright and pour the jam through a funnel to fill each jar with jam up to ½ inch from the rim. Wipe the rims clean with a kitchen towel and seal with the lids. Screw on the bands until snug.
4. Place a canning rack into the pot of hot water and return to a boil. Use tongs to lower the jam-filled jars into the pot, making sure there is enough water to cover the jars by 1 inch. Boil the jars for 10 minutes and turn off the heat. Leave the jars in the hot water for 5 minutes, then use tongs to remove them. Cool completely before storing in a cool, dark, dry place.

Well Preserved's link led me here and I'm really intrigued by the combo of rhubarb and beer. We're on our fourth batch of homebrew, so there's plenty of beer for this recipe; I'm excited to give it a whirl.