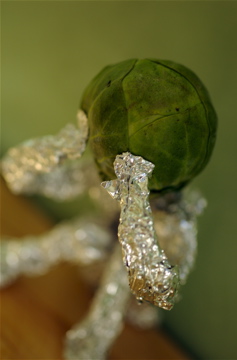 I thought that I was doing my little brussel sprout buddy a favor by letting the cats play with him instead of cooking him for dinner.
But when I braised all of his friends to make Molly Stevens’ creamy braised brussel sprouts recipe, he crumpled against the wall and sat there for hours with his head in his hands, wailing and wailing and wailing. If you have never heard a brussel sprout wail before, it really is quite adorable, more like a blind, six-day-old kitten than a distraught vegetable.

Even though I thought his howling was quite charming, he was still making me feel guilty. Nothing I could say would comfort him. He kept muttering something about the good old days at the market, sitting out in the morning sun with his pals, daring each other to roll out of the barrel and go make out with the green beans.
I tried to tell him that if he had gone into the pot, he would have been eaten by now, or even worse, cold leftovers in the fridge. He said he would rather have been sacrificed for the good of dinner along with his friends than be cast to the floor as a plaything for the smelly cats.

I thought some ice cream would cheer him up, so I went to the store and bought him a pint of Ben & Jerry’s Napoleon Dynamite ((((off the subject: that flavor is pure genius – half Cherry Garcia and half Chocolate Fudge Brownie, split right down the middle, can life get any better?)))).
Things were looking better when he ate the entire pint in one sitting, however, when he was done, he just sat there sniffling dejectedly and wouldn’t come out. 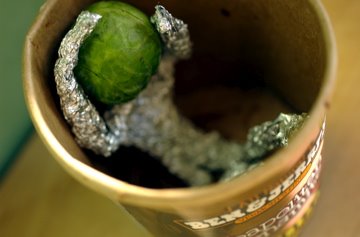 I decided he really did need some time alone, so I left the house on the pretense of errands. When I came back, he had drunk himself into oblivion on my last bottle of Oregon wine and passed out. That little monster, why did he have to go and drink my good wine? 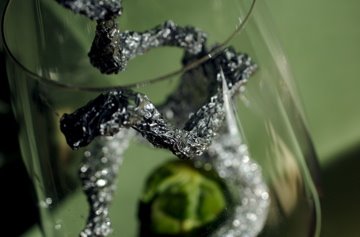 Since he was unconscious anyway, and I was bitter, I stomped over to the fridge and took out the leftover braised brussel sprouts. I reheated them, sat down at the table, sighed, and let their creamy goodness soothe my bitter soul as I flipped through a Zingerman's catalog. I was slipping into such a delightful reverie that I did not notice my inebriated brussel sprout friend climb out of the wine glass and crawl over to the window.

I heard a faint sob, and before I could stuff the last sprout in my mouth and dash over to the window, he was gone. 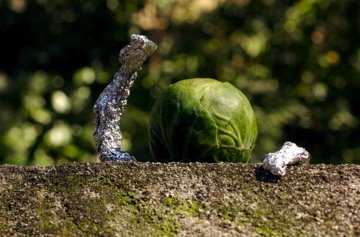 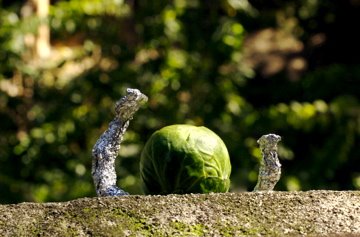 Well, there was nothing I could do.
Time for some more brussel sprouts.


Creamy Braised Brussel Sprouts
(you don’t even need a Dutch Oven!)
~ adapted from All About Braising by Molly Stevens 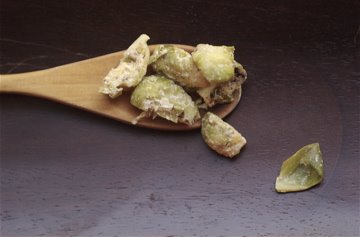 Trim the base of each sprout and peel off any ragged outer leaves.
Cut the brussel sprouts through the core into half. Slice each half into either thirds or halves so that you are left with little wedges no more than 1/2” across.
Over medium-high heat, melt butter in a 12” skillet that has a lid.
Brown the brussel sprouts in the butter for about 5 minutes, until there are brown spots on the sprouts.
Pour in the half & half (or cream, if using), stir, cover, reduce heat to a slow simmer, and cook for 30 to 35 minutes.
Remove the cover, squeeze the lemon juice into the sprouts, and simmer, uncovered, for a few minutes so the cream thickens and turns into a beautiful glaze.
Serve hot or warm.
Molly recommends adding toasted hazelnuts or crisp bits of bacon for a fancier presentation. 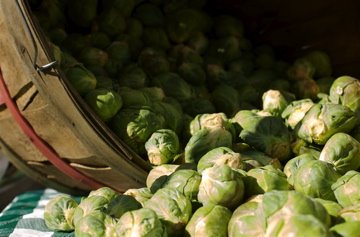 Erielle, your blog is always a breath of fresh air! Great recipes but I giggled like a kid at the pictures, great way to put it together!

This is fantastic! What a fun read! Love the photos & the whole story.

errielle, i have to confess it makes me so happy whenever i see you have a new post in my bloglines. your writing is so inspired. this poor little sprout, he's in a better place now...sniff

Thanks Helene!
I probably spent way too much time this morning taking pictures of aluminum-foil-brussel-sprout-man, but I was having fun, even if he wasn't.

L,
Thanks for the inspiration to play with my food...I got it from your SLW flickr group!

Sam,
If you try brussel sprouts this way, you will go straight from dislike to pure love. They are so easy to prepare...it feels too good to be true.

Aria, that's so sweet of you to say that! I love bloglines. I love it when boldtype numbers show up in parentheses, because that means I get to procrastinate doing whatever I am supposed to be doing for another few minutes.

oh that's hilarious. Shame it's all about the world's worst vegetable.

So funny! Great post. "Goodbye cruel world" -- too much.

I adore Brussels sprouts; will have to try them "your" way.

Poor little guy. But who REALLY drank all the wine?

Lisa, thanks! They're great as leftovers, so make a whole potload!

Wait. I thought it was friends who thought they were "close" friends who drank that bottle...

What's this? You'll never believe what came rolling through the door lop-sided with only his left side aluminum foil extremities. He tells me he's practically been rolling in circles since he lost the right side going through one of those Republican "right-thinking" states on the way to San Diego - Texas - he recalls, but he's not going back.

yum!! i love the almighty brussel.

Best post I have read in a long time :)

M- Okay, it's a plan! Wouldn't that be so much fun? Now you have planted the idea in my head...
By the way, didn't you mean xOx (little kiss, big hug, little kiss)?

Anonymous- If you have any spare tin foil lying around the house, would you mind patching him back up again? And maybe buy him some brussel sprout friends to cheer him up?

Rachel- yum is right! I think they're good for you, too, minus the half & half, of course, but hey, it all cooks down, right?

Sillypants- Yay! Thank you so much! Thanks for linking me on your site, too. I love reading Mad-Cap Minivan.

I just came across your blog....and don't remember from where...sorry

but that post is frickin' hilarious! my gawd.....I haven't read or seen anything so frickin' funny is ages. it's absolute genius!

I made this tonight. Blogged about it. Damn, that turned out good. I realized mid-cooking that I had tossed my lemon out over the weekend. I knew I needed to substitute something. Well, some of the fresh sage I bought for the butternut squash puree recipe you recently posted sounded like a good fit. Oh yeah. Perfect choice. So yum. I now like brussel sprouts again.

Congratulations on being nominated in the Food Blog Awards "Best Food Blog—Post" category! This was a killer post and it was great to see you on the list! Yours is the best, of course.

Oh my gosh this is funny! What a charming post--now I'm off to give my brussel sprouts some love.

This is possibly one of the funniest blog posts I've ever read. Thanks for posting and brightning my day : )